I’m posting this a day early because tomorrow is a public holiday and I have a bunch of stuff planned out of the house. The holiday is to celebrate Commemoration day and the 45th National Day of the UAE 🙂 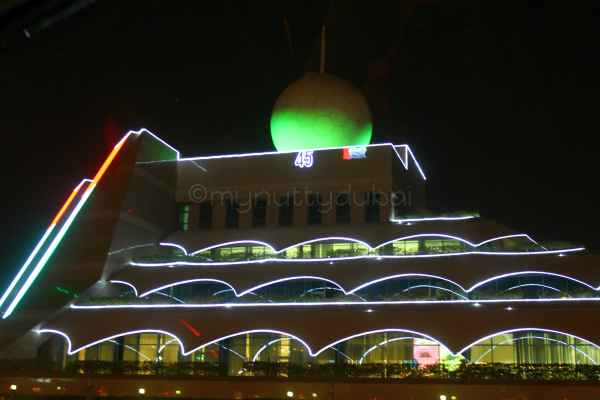 A couple of months ago, one of my gym instructors told me about the possibility of running up Jebel Hafeet, and being one that almost never shies away from a challenge (and is always looking for something new to do 😉 ), I firmly planted the idea in my head and waited until the date was announced when this would all happen.

Jebel Hafeet is the second largest mountain in the UAE. With an elevation of 1,200m, the top of the mountain offers spectacular views of the city, and a touristic drive up the 52 corners to get to the top.

Finally the date was released… it fell on the weekend just after my half marathon 😦 I was not sure if this would be a good idea so I ran it past my running coach and he said “I’m sure you’ll be taking walk breaks up the mountain, and as long as you do no running the week between the 2 runs, you should be fine”. So I immediately messaged my instructor and told him – I’m IN!

I then booked a hotel for the Thursday night because getting to the mountain is approximately a 2-hour drive from Dubai, and with a 6am start, I didn’t want to be getting up at 3:30 to then drive all that way and still have to run up a mountain!

The view from our room

A friend of mine, Mez, jumped on board and joined me on Thursday, and then of course up the mountain on Friday morning 🙂

We arrived at the Hilton at about 7pm on Thursday, dumped our bags and headed straight to dinner – loaded up with some delicious pasta and meat! After that we drove out to the meeting point for the next morning as neither of us knew where it was… and since it was right at the bottom of the mountain, we then decided to drive up as well and get a proper idea of what we were in for the next morning. Not sure if that was a good idea 😛

The drive up was really stunning, but a little bit of a wake up call too – all the twists and turns that we drove through were going to be done on foot the next morning! On our way back down we counted how many turns – 52 – and measured the distance – 10.5 km’s. The run would start in the park a short distance from the bottom of the mountain, so the run itself the next morning was closer to 12 km’s.

The view from the top 🙂

We headed back to the hotel and got a good night’s rest, ready for our 4:45 alarm in the morning!

Friday morning we made our way to the meeting point – it was dark, chilly and a little bit windy, but there were a few people gathering at the meeting point and the vibe very quickly got buzzing which helped to warm us up a bit!

Looking up at the start of the mountain 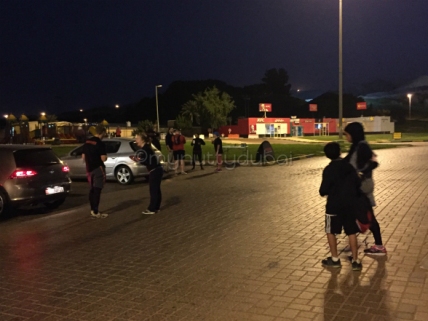 6(ish)am and we were off – my gym instructor out in front, showing us all how it’s done!

Our strategy was simple – run for as long as possible, as steady as possible, and take walk breaks when needed. Our aim was even more simple – get to the top of the mountain, in a reasonably respectable time. The night before we’d joked around and I said that I thought it would be at least 1 hour 40 minutes to the top…

We started off strong, running one behind the other (it was a very narrow path). Mez started out in front of me until she moved over for me to take the lead for a bit. At one point she told me to keep going while she caught her breath. I was feeling super strong so just kept plodding along until I too needed a break. By this time she’d started running again and when she caught up with me, we continued together. We did this practically the whole way up the mountain, leap frogging the front runner and helping each other along.

My legs felt really good for almost the whole run. It was only at about 9 km’s that my hamstrings started to really say ‘hi there!’, and then my lungs started to really struggle. We’d climbed who-knows-how-many meters in a very short amount of time and the altitude was starting to kick in. And there was a total b**ch of an incline that completely washed me out…. but I would not let the mountain win! We knew that there was a little bit of a flat bit coming, and then a short down bit before the finish line so we just had to get there.

Some of the twists and turns while running

This was maybe at about halfway – we’ve just come from that bit of road… just to give you an idea of the inclines!

We made the most of any flat-ish bit we came across by getting our speed up a fair bit, and when we reached that downhill – boy did we fly! The bottom of it was about 500m from the finish line (which was at the top of another small incline) so Mez says to me “Right, just this last little hill – slow and steady and we run all the way!” I acknowledged my agreement, but after only a few meters I told her “Bugger slow and steady – let’s push to the end!”

And so those last few hundred meters were pushed hard, giving it our all, pumping our little legs as hard as we could up that final incline, to reach the top of Jebel Hafeet in an (as far as we’re concerned) impressive 1:38!!! ** My instructor managed a super impressive time of 1:18!!!!

Coming in strong for the finish!

The run was supported by volunteers who had support vehicles stopping at points up the mountain where they handed out waters… and then once at the top they had water again for everyone, and then they drove us back down 🙂 It was freeeeezing (well, in desert-terms) at the top of the mountain and super windy! We hung about while waiting for all the runners to make it to the top and then jumped in the support vehicles and got taken back down. Next time I’ll know to put something warm in the support car, and probably a banana too – I was absolutely ravenous when we got to the top and there was no food in sight 😦

But, we got back to our hotel room, enjoyed a lovely hot shower and then found the breakfast buffet and stuffed our faces silly!

An extremely enjoyable night and morning out with everyone, and I really do hope that I get to do this again – and maybe even smash my time!